How does the approval process work?

The approval process it's a paperless communication between the person in charge of engaging the Cast and Crew members and issuing start paperwork (i.e. Production Coordinator, Unit Manager, Production Secretary) and the Project Managers or Producers.

Any Willco user can send an approval request for a new job assigned to a Cast or Crew member, or a signature request for a Deal Memo (Start Form) to any other user/s set as Approver/s.

First of all, you should know that only Admin Users and Standard Users can be Approvers. Admin Users are the ones to set a user as an Approver. If you are an Admin, go to Settings > Users page to define your Approvers for your project.

You may need to customise who your Approvers are depending on what is needed to approve. That’s why you can choose one or more Approvers for: 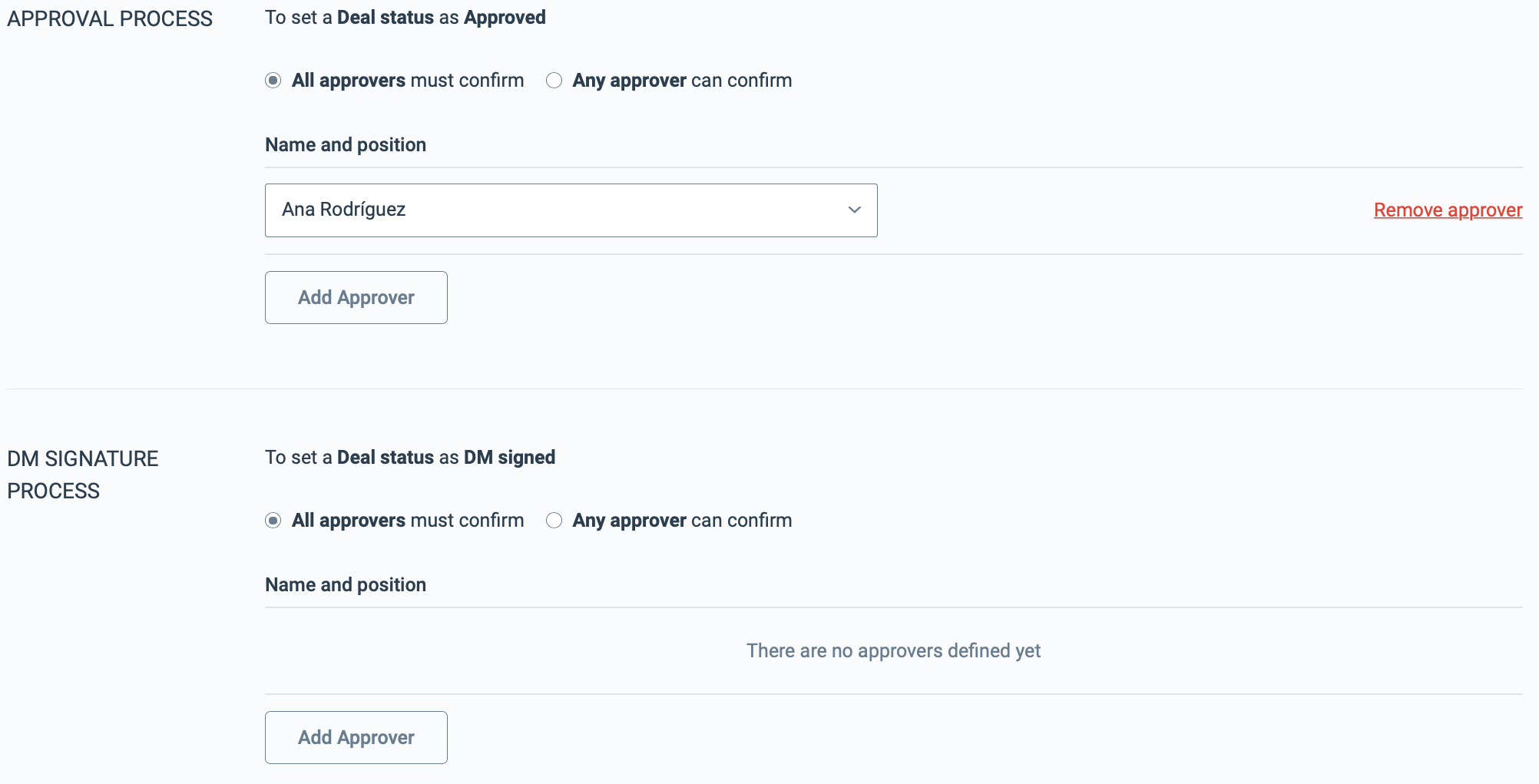 Set the Approvers’ workflow for both levels

Depending on the priorities of your project, you may need more constraints to assure security in the decisions or more flexibility to work in favour of agility. Consider what are the main needs in your film in order to choose an Approvers’ workflow.

All Approvers must confirm: the deal will not be approved until all the Approvers give the green light to it. It means that if only two of the three Approvers (e.g. Line Producer, Unit Production Manager and Producer) confirm a deal, the deal is not valid until the third person confirms it.

On the contrary, if only one of the Approvers denies approval of a deal, the deal status will be automatically declined, without the need for rejection of the rest.

Pro Tip: This workflow gives priority to the specific voice of each Approver, providing an assurance that a deal has been validated by different figures that bring different layers of security to an approval process.

Any Approver can confirm: this means that despite the number of Approvers, when one Approver confirms a deal, the deal will be validated and pushed to the next status, without the need of the confirmation of the rest of the Approvers.

The declining process works equally in both workflows. When any Approver rejects a deal proposition or a DM proposition, the deal is declined and doesn’t move forward.

Pro Tip: This workflow is ideal for projects where fluent and quick resolutions are valued, and all the Approvers have a similar status in the approving processes. 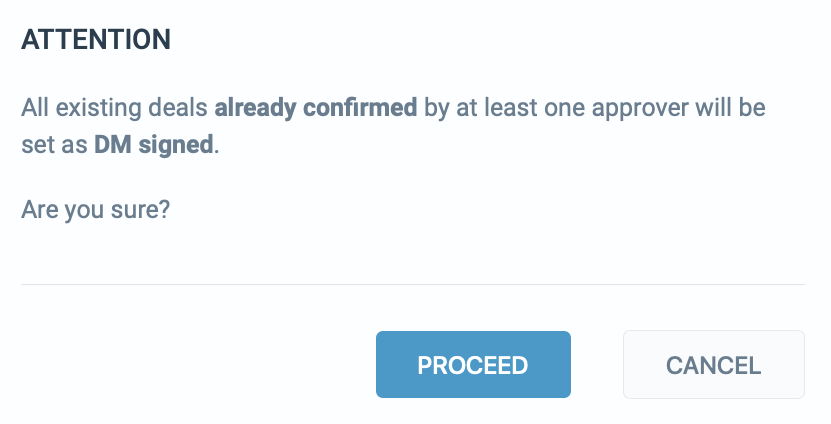 Watch out: If you change your selection from All Approvers must confirm to Any Approver can confirm, a pop-up window will warn you that all the deals that have been confirmed by one of the Approvers, despite the rest haven’t confirmed yet, will be considered as approved.

This is the easiest part, any Cast or Crew deal status set to Proposed or DM ready will generate an email sent to the project Approvers.

The users will be warned before sending the email to be sure it's a desired action.

Approving (or signing a Deal Memo)

We will use an example to guide us through the process: the Production Secretary (Antoine Laforet) has set as Proposed the actress Katelin Sands for the character Molly Bloom.

The Unit Production Manager (Asia Jarzyna) is set as project Approver and will receive an email similar to the following: 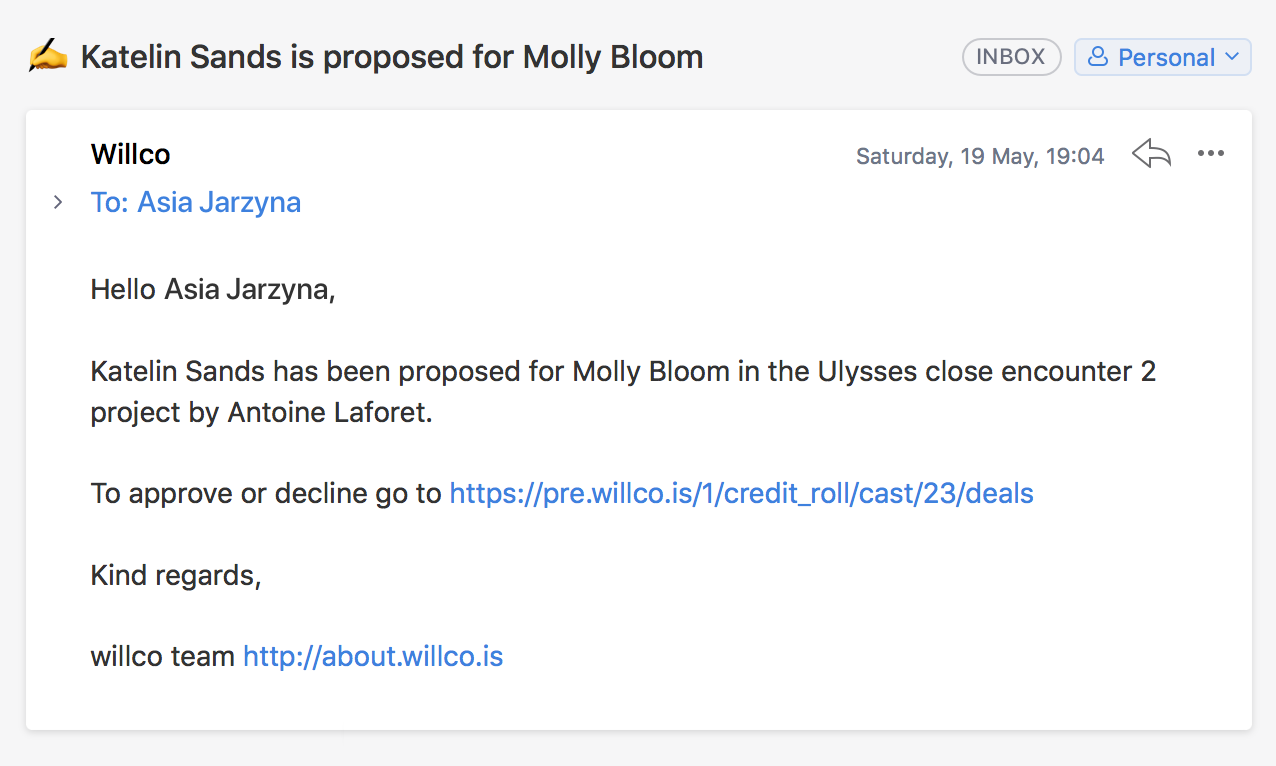 The link in the email will take the Approvers to the Cast/Crew deal details page where they can see who set the proposed or DM ready status and a big blue button asking for their approval (or signature).

Once pressed, the approval window will display. There, the Approvers can set a comment (optional) and approve (or sign) or decline. 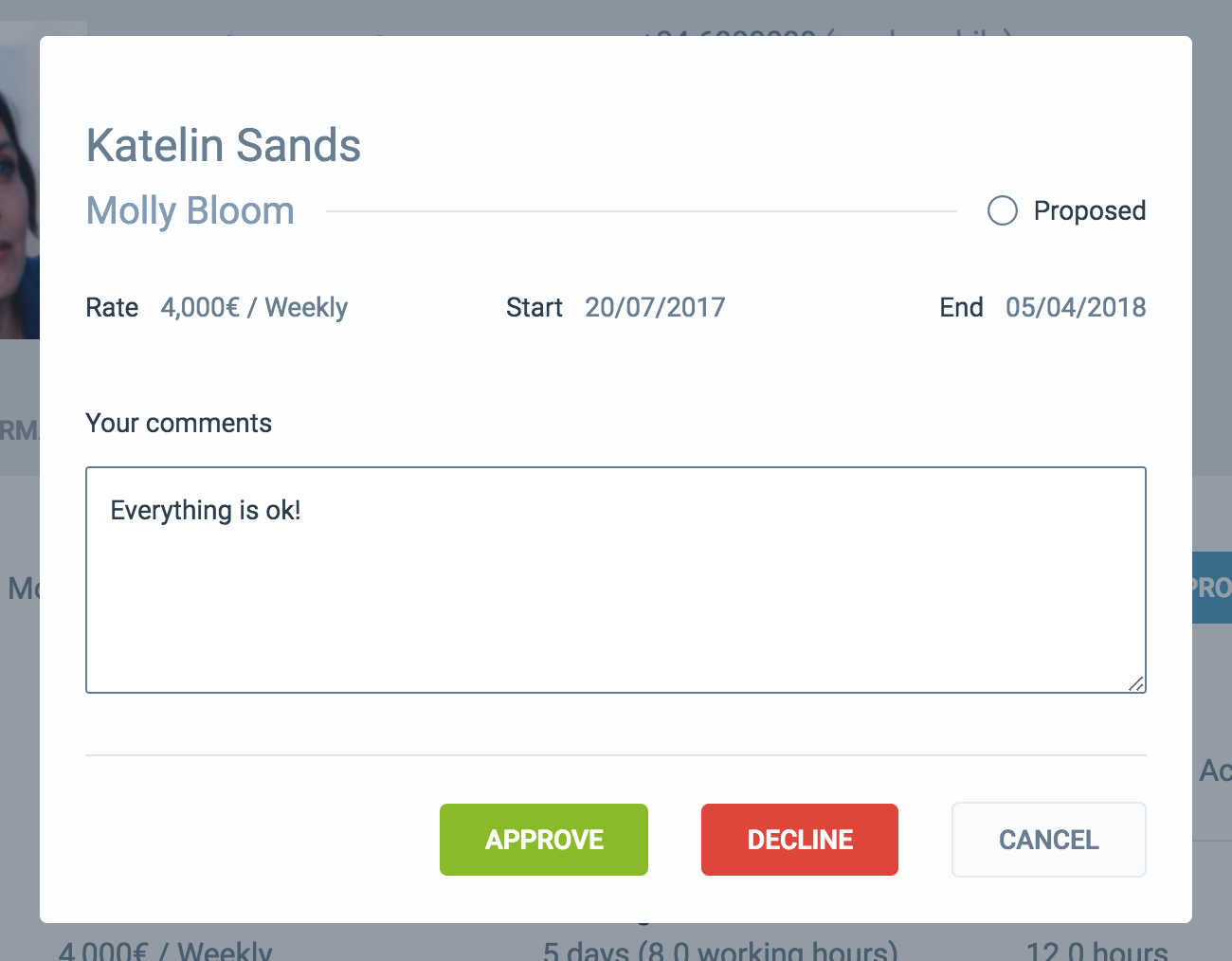 This will change the deal status of the Cast/Crew member to Approved/Declined or DM signed/DM declined and send a heads up email to the user who set the previous proposed or DM ready status.

If a comment has been set on the approval window, it will be displayed when the mouse hovers over the status change information: